We are the best in the UK

Oxford International College is an elite A-level college whose commitment to academic excellence, career advice, and personal development have consistently put it at the top.

See our position in the table: 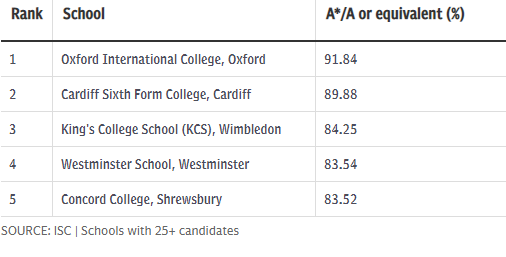 The Class of 2019 will go on to study at the world's top universities:
At OIC, we are known for providing an open and stimulating learning environment where students are encouraged to achieve their highest potential while enjoying the cultural life of the beautiful city of Oxford. Our students are taught by some of Oxford’s finest tutors, who are all experts in their fields. They are mostly Oxford University alumni or holding doctorate degrees from Oxford University.

We foster a culture of responsibility for one’s own achievements, as well as a sense of duty to better the world we live in. Our innovative curriculum provides students with the best chances to succeed at university interviews, higher education, and later in their professional lives. We take pride in our unique integration of three key skills to success: Academic Excellence, Career Development, and Personal Development.

Much of OIC’s recent success can be attributed to its Chief Education Officer, Yasmin Sarwar. Yasmin was the original founder of another highest-performing A-level college in the UK for nine consecutive years, until it was dethroned by OIC.

In her career, she has sent over 300 students to medical school and over 200 to world-class institutions including Oxford, Cambridge, LSE, and Imperial. Yasmin also has a position on the recruitment panel for medicine in two top Russel Group Universities, which means she has her finger on the pulse of exactly what admission tutors are seeking.

Since she moved to Oxford International College three years ago, Yasmin's direction has transformed its performance. Watch a video of Yasmin, in which she explains the key ways to academic success.

Learn more about the college here and apply here.