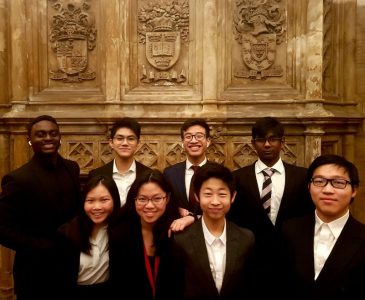 Eight OIC students participated in the Oxford Schools’ Debating Competition that took place in the prestigious Oxford Union on Wednesday 4th March. That was their first competition at British Parliamentary-style debate (BP).

This format is unique as motions are announced only 15 minutes before the debate and teams must prepare the arguments without electronic devices. Four pairs compete in each debate, two on the proposition side and two on the opposition side. That day a total of 48 teams participated in the competition.

The first motion, ‘This House would impose fines on public acts of climate change denial’, proved to be very engaging. Three OIC teams were Opening Opposition (OO). As OO they defined the motion very effectively and provided solid arguments and rebuttals against the proposition, for example, mentioning the importance to protect freedom of speech. The fourth OIC team was closing opposition (CO) and summarised the debate identifying the main clash points of the debate. These were related to the feasibility of implementing the policy and the fact that resources would be better spent on other important areas.

All OIC students participated with the right spirit and they demonstrated their eagerness to learn from the experience as they requested individual feedback from the judges at the end of each debate. Overall, it was a very challenging competition as well as a unique experience, and students are looking forward to doing more BP debate in the future.

We have the most eloquent students! Click here to read more about our debate performances.