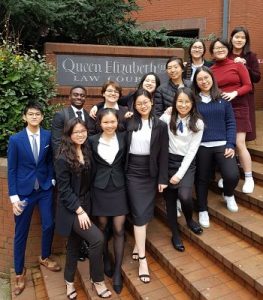 The competition was organised by Young Citizens, with real judges and barristers overseeing the students’ performances. That means that the students had the unique opportunity to act as barristers, witnesses, jurors, etc. in a real court in front of real judges!

Twelve schools from different parts of the UK participated in it, and each team had to act as prosecution or defence in two challenging hypothetical cases. The first one involved an acid attack in which the key witness claimed that was able to identify the attacker. The second one was a money laundering case and the key aspect was whether the defendant knew or suspected the money’s criminal origin.

During the trials, OIC barristers delivered excellent opening and closing speeches. They were also very incisive during the cross-examination of the witnesses. The judges praised the bravery and outstanding performances of all OIC barristers, witnesses, clerks, ushers, and jurors. OIC ended in a well-deserved fourth place (very close to the third), which demonstrates the big effort and work that students put into this competition.

After the trials, OIC students had the chance to ask the judges and barristers about their careers and studies, as well as the different professional paths available in law.

Overall, the Mock Trial Competition was a very inspiring event that allowed our students to demonstrate their analytical and public speaking skills. Congratulations to the finalists of the Competition, a big thank you to Young Citizens for the great organisation, and well done to OIC students for their superb performance.